Print the #Move the Money banner. Fill in how you would spend the money. Take a selfie with the banner and share it online!

Do use these infographics from the Global Campaign on Military Spending to share the important message: Militarisation is accelerating at an alarming rate at a time when it should be drastically reduced in order to tackle the grave challenges humanity is facing.

‘We, the signatories, call on the world leaders meeting at the General Assembly of the United Nations, to dramatically reduce military spending in favour of healthcare and all social and environmental needs.’ 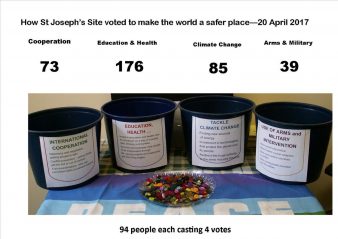 At St Joseph’s School and site of Pax Christi office in Hendon London, staff and pupils of the school came along to cast their vote for a safer world.

As well as showing curiosity about what was going on, 94 people took part in the vote and you can see the results in the photograph. 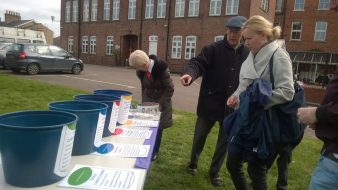 St Joseph school and others cast their votes.

One of our members had made some excellent placards, saying that £2,500,000,000 is spent globally every minute on the military, and they stood out across the big pedestrian area, so that a large number of people could not help but get that message.
We had some long conversations, including one with a young man who was in the navy.  48 votes were cast. 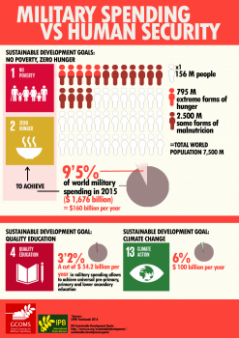 The International GCOMS team have put together ideas, twitter messages, hashtags that can all be used by individuals and groups to help promote the week of action.   You can also find info graphics here which are useful in presenting facts and alternatives to military spending .

If you cannot arrange a stall or activity you could write to the national and/or local press about the  opportunities that would be created by reducing or cutting military spending.  Let us know what you do and we can share with others!