Arrange a watch party to see the film War School and use it to promote some discussion. The film is about militarism in schools. There is a new trailer with a link to the full film at https://youtu.be/Wj7JD62mVjQ

and the full film is here https://youtu.be/bl5Zc71KV_g

2018 GCOMS handbook – useful statistics, graphs etc that could be adapted for stalls and exhibitions 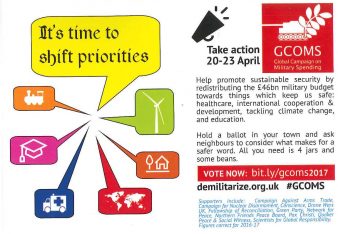 Arms to Renewables: what is the £37,000,000,000 currently spent on the military could be shifted to investment in renewable energy?  CAAT tell us how

Military Spending workshop  with support resources for workshop here (lesson 4).  Aimed at young people but could be used with all ages. Produced by Pax Christi

General Election Briefing 2015: with sections on military spending, Trident and the arms trade. Produced by Network of Christian Peace Organisations – many are GDAMS members 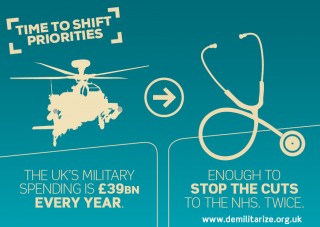 Three simple designs to put our message across –

Pax Christi’s newsletter with lots of info, resources and ideas on the day of action