Reposted from a report on ICN by Ellen Teague. 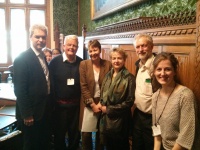 The speakers at the event in Parliament

“The UK spends £39 billion a year on the military and arms, while vital services in health, education, welfare and renewable energy are cut or under threat”. This was the concern raised at a meeting in the Houses of Parliament on Monday 15 April, when Pax Christi joined 38 other peace and development groups to challenge military spending in the UK and globally. Bruce Kent, vice-president of Pax Christi and founder of the Movement for the Abolition of War, chaired the meeting of around 80 people where speakers called for an immediate shift in government policy and spending priorities, away from military spending and towards public services and sustainable energy.

The meeting started with the viewing of a new short film from Pax Christi ‘What would you do with $1.7 trillion?’ In the film, CAFOD Director Chris Bain suggested that this military expenditure could be used to help poor countries adapt to climate change and to help develop a green economy with less reliance on fossil fuels. Justice and Peace activist Dr Jim Sikorski, from South London, suggested the money saved could be spent on improving mental health services and on keeping small local hospitals open, rather than closing down local services such as those at Lewisham Hospital.

Speaking at the meeting, Kate Hudson, Chair of the Campaign for Nuclear Disarmament, highlighted the ‘Scrap Trident’ campaign and increasing opposition to spending around £100 billion on renewing Britain’s nuclear weapons system. “Trident is an old Cold War system” she said; “Britain needs a new culture of peace where it plays a new role in the world”.

Anne-Marie O’Reilly of Campaign Against Arms Trade (CAAT) felt that, “while our public services face drastic cuts, the government cannot continue to spend more than almost every other country in the world on weapons and war”. She pointed out that, “the UK’s military spending each year is enough to stop the cuts to the NHS twice over”. She called for an end the annual £700 million government subsidy of arms exports.

John Hilary of War on Want criticised Prime Minister David Cameron for boasting recently that Britain has the fourth largest military budget in the world. “And we are moving into a period of high technification of War” he said “where Britain is expanding its use of drones, and these have wrought high civilian casualties in Pakistan and Afghanistan”.

Green MP Caroline Lucas called for an assessment of what the real threats facing Britain are. She felt global Climate Change, “should be seen as a weapon of mass destruction” noting the massive drops in wheat production in Russia and Ukraine in the past 12 months due to unpredictable weather will affect food prices. “I feel the real threats facing us do not need more military hardware” she said. In her view, Britain and other nuclear powers should abide by the Nuclear Non-Proliferation Treaty which binds them to disarming their nuclear weapons. “This is simply not happening” she pointed out, “and perhaps it would be easier to persuade North Korea to abandon nuclear weapons if we kept within the law ourselves”. She criticised government ministers who support military expenditure because of job opportunities in a military-fuelled economy, suggesting that with imagination and commitment, alternative investment and jobs can be developed. “Social media helps us challenge mainstream government policy on military spending” she said, tweeting several messages from the meeting to her 55,000 Twitter followers.

Labour MP Jeremy Corbyn was concerned about “anaesthetisation” in relation to war, such as seeming public acceptance of the use of drones in Afghanistan. He hoped for more public campaigning such as the Global Day of Action on Military Expenditure which would mobilise people to tackle arms expenditure. “We are going through a period of unbridled conflict over resources” he said, “but we need to get a handle on learning how to share resources”.

Concluding the meeting, Pat Gaffney of Pax Christi urged people to challenge militarism as a “sacred cow”. She said, “we must bust the myth that violence and war works”, adding that “a huge amount of work needs to be done by our groups on education, encouraging young people to articulate what security means for them”. Bruce Kent wanted a greater challenge to “the militarisation of education” and called on the big development agencies to publicly make links between poverty and military spending.

The Global Day of Action on Military Spending saw actions across the UK. Earlier in the day on Monday, Pax Christi joined campaigners holding a “Play the budget right” street theatre action outside Westminster to protest against the billions spent on the military and subsidising arms exports, while vital public services are cut back. Players seeking medical treatment, a school place or welfare services instead won military equipment, symbolising the transfer of public resources into military spending.