On the Global Day of Action on Military Spending, campaigners took the message to parliament. See more great photos here and here.

Every year a whopping £700 million of public money is spent supporting arms exports, often to countries in conflict and human rights abusers. This subsidy is handed to a deadly sector which in the UK accounts for less than 55,000 jobs. Meanwhile, at least 56,000 jobs in the NHS have been cut since this government came to power.

Then consider the difference that the UK’s £39 billion military spending could make if it were redirected to meet human needs. The UK continues to have the world’s fourth largest military budget. Yet as austerity is implemented, it has seen one of the smallest dents in its budget line.

On 15th April, the Global Day of Action Against Military Spending, CAAT, Pax Christi, War on Want, CND and others joined together to take our message to Parliament, with a protest against prioritising military spending over public services and welfare.

We came together to ask for investment in improving people’s quality of life, not destroying it through war and suffering. Improvements could be made by scrapping the £3bn annual cost of nuclear weapons in favour of quadrupling investment in renewable energy. By scrapping Trident, worth £100bn, we could fully fund all A&E services in our hospitals for 30 years.

The idea of wasting money on the military while major cuts to welfare was at the centre of the ‘Play the Budget Right’ game show we hosted at the start of the morning. It dramatised the complete lack of continuity between the government’s priorities and that of the people. A student needing tuition fees received instead military hardware. An injured man received an aircraft carrier instead of medical treatment. An engineer seeking funding for a renewable energy project was left disappointed when she got given money for military projects instead.

We then chanted ‘A&E NOT BAE!’ and ‘WELFARE NOT WARFARE!’ to bemused commuters and Westminster politicos, handing out hundreds of leaflets showing the complete waste of money spent on ruining lives rather then saving them!

While across the UK major cuts to public services are being made, the military budget has been protected at their expense. A government that plans to find the money to spend £100bn on Trident nuclear weapons renewal but can’t afford to scrap cuts to the NHS is one that can’t seem to play the budget right at all! 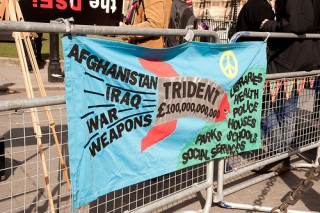 The protest was one of ten throughout the UK. At the nuclear weapons base in Faslane, gates were closed in a peaceful blockade which saw 47 people arrested. See reports from Coventry, Wrexham, Leicester and Knighton too.

In London, the day concluded with a lively meeting in Parliament, where Caroline Lucas MP articulated the consensus that “the real threats facing us do not need more military hardware”. It was clear that the day of action is just the start of concerted action to make reducing military spending an alternative to austerity.

Actions took place in tens of countries around the world. See photos from international actions here.