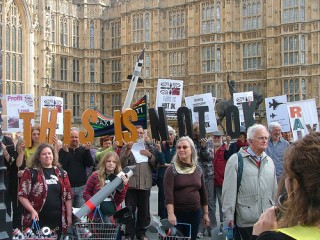 Campaigners spell out their message outside parliament

15 April 2013, 5pm-6.30pm, Committee Room 6 at the Houses of Parliament (Please arrive in good time to get through security)

On the Global Day of Action on Military Spending, take part in a public meeting to examine the social justice possibilities of redirecting military spending, chaired by Bruce Kent, Vice President of the Movement for the Abolition of War, with speakers Caroline Lucas MP, Kate Hudson of CND, John Hilary of War on Want, and Anne-Marie O’Reilly of Campaign Against Arms Trade, and the launch of Pax Christi’s new short film on the theme of the event.

For too long we have lived with the myth that high military spending maintains peace, creates jobs and combats terrorism. It prevents the money being spent on tackling real challenges such as relieving poverty, improving health, and protecting the environment.

Military responses, with their real and hidden costs, do not help; they threaten human security. But there are alternatives. Come to this meeting to hear from inspiring speakers and discuss how we can work for military spending to be redirected to meet human needs.

Meeting called by Movement for the Abolition of War with others involved in the network for the Global Day of Action.