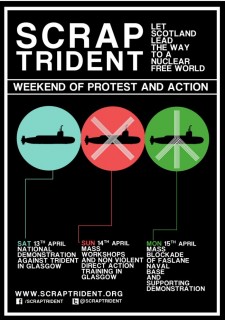 The Scrap Trident Coalition have three days of action organised on 13-15 April to coincide with the Global Day of Action on Military Spending. here they explain why…

Scotland and the UK have had nuclear weapons for 50 years. And now, while spending on health, education, pensions and disability benefits is being slashed, the government is planning to replace Trident at a cost of £100 Billion.

But the people of Scotland are overwhelmingly opposed to nuclear weapons. We want Scotland and the world to be free of these horrendous weapons of mass destruction. But we must act now to put an end to it. A broad-based coalition of groups have come together to call for scrapping Trident and funding human needs.

Whether you are for independence or not, this is the time to demonstrate your opposition to wasteful and immoral nuclear weapons. We will take to the streets of Glasgow and take action at Faslane in April 2013 to demand Trident be scrapped and the resources go to fund healthcare, education, pensions, disability benefits and more.