Today, the Global Day of Action on Military Spending (GDAMS), it was announced that world military expenditure totals $1.75 trillion. Members of the GDAMs UK Coalition gathered in  Central London on 14 April to symbolically redistribute the UK’s £38 billion military budget to government departments with greater needs. The UK has the 6th largest military budget in the world. 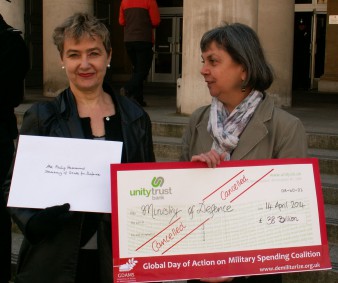 The action in London, where speakers included Bruce Kent of Pax Christi, Kate Hudson of CND, John Hilary of War on Want and Stuart Parkinson of Scientists for Global Responsibility (via video link) was created to hand over cheques for a share of that £38 billion military budget to overseas development, health, environment and climate change and international cooperation, to respective ministries.

Letters were also presented inviting each Minsters of State to meet with the NGOS to see how together a case could be made for reallocation of military spending towards projects investing in human needs and sustainable development, both nationally and internationally.

Pat Gaffney of Pax Christi urged those taking part to work all year around to make links between issues of conflict, poverty and the destruction of the environment. These are the real security threats that our world faces. Investing resources and research in these areas rather than in military models of security will make the world a more just and safer world for all. Similar actions took place in Oxford, Coventry, Leeds, Bristol and other cities and in Latin America, Asia, Africa, North America and throughout Europe.