Events were held in Coventry and Oxford as part of the Global Day of Action on Military Spending (GDAMS) on 14th April 2014. 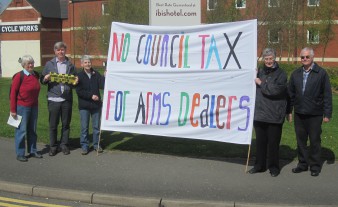 In Coventry, campaigners from Pax Christi and Stop The War protested against the use of Council Tax money to invest in arms companies such as Lockheed Martin. At lunch-time, the campaigners attempted to present a letter of protest to the Lockheed Martin’s office in Coventry University’s Technology Park.

They were prevented from entering the site by security guards who had been posted there since 7am, in anticipation of protest. Eventually, it was agreed that the security guards would deliver the letter, which calls on Lockheed Martin to explain whether they continue to be involved in the manufacture of cluster bombs.

Later in the day, campaigners distributed leaflets in the city centre, explaining the Council’s complicity in the funding of arms companies with Council Tax money. To publicise the Day of Action, campaigners used postcards illustrating alternatives to military spending, a petition to scrap Trident, and a People’s Budget to allow citizens to declare their own spending priorities.

No member of the public thought that money should be spent on renewing Trident. Arms companies involved in the Trident programme include Lockheed Martin, Rolls Royce, Northrop Grumman and General Dynamics, all of whom have links to Coventry (the ‘City of Peace and Reconciliation’, as it likes to be known), and receive public funding through investments of Council Tax money in the West Midlands Pension Fund. 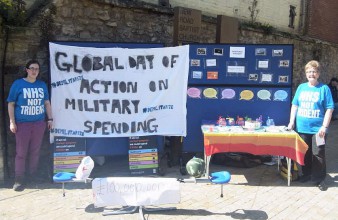 A group of campaigners from Pax Christi and the Fellowship of Reconciliation had a visually colourful presence on Bonn Square with a big home-made banner. Passers by took up the invitation to take part in a survey and Budget Game.

Using buttons and jars, people were invited to reallocate some or all of the £40 billion annual UK military budget. Education and healthcare proved the most popular choices for reallocated military funding.

A children’s see-saw with an army helmet on one end and a medical cap on the other was part of the effort to “shift priorities” in the thinking on national and global spending. The “shifting priorities” postcards, produced by Pax Christi, were used to distribute to passers by.