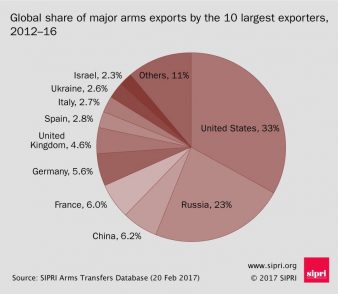 The Stockholm International Peace Resarch Institute report an increase in arms transfers driven by demand in the Middle East and Asia.  The flow of arms increased to Asia and Oceania and the Middle East between 2007–11 and 2012–16, while there was a decrease in the flow to Europe, the Americas and Africa. The
five biggest exporters—the United States, Russia, China, France and Germany—together accounted for 74 per cent of the total volume of arms exports.