Take Action for GCOMS 2020 10 April – 9 May (In UK). This year, most actions will need to be online. Extra creativity is needed! 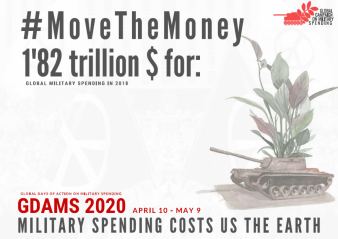 Be part of the #MovetheMoney Selfie Campaign

This is a simple way of attracting attention and making a point. It does not have to be sophisticated… something short and witty is what you want!

CAAT, CND and Pax Christi members dramatized a ‘game show’ outside the House of Commons to show the lack of continuity between the government’s priorities and that of the people. A student needing tuition fees received instead military hardware. An injured man received an aircraft carrier instead of medical treatment. An engineer seeking funding for a renewable energy project was left disappointed when she got given money for military projects instead. Perhaps you could make a short film to share online, making a similar point in a visually engaging way?

Or you could take inspiration from these activists who built a visual display to highlight how military spending vastly outweighs what would be needed to tackle world hunger, provide universal primary education and clean water.