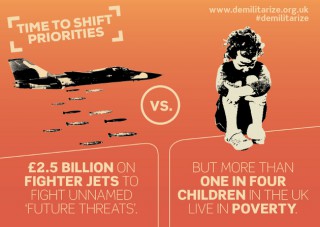 Last month, another £570 million of public money for upgrading the UK’s nuclear weapons was announced (£120 million to refuel a Trident sub; £150 million more to be spent on nuclear plants making the reactors; and £300 million to refurbish the submarine yard). Budget Day confirmed that when it comes to military spending, there’s no such thing as austerity: it was set at a huge £38 billion for the coming year.

The government thinks we have £700 million to subsidise arms exports, £2.5 billion for new fighter jets, £6.2 billion for new aircraft carriers and £100 billion to renew nuclear weapons… so why are homelessness, hunger and inequality so rapidly on the rise?

It is a scandal that 1 in 4 children in the UK grow up in poverty. It is a disgrace that 20,000 disabled people will lose support for the basics in life when the Independent Living Fund closes. It is outrageous that thirteen times more people are relying on foodbanks to survive than did five years ago.

It is all the more scandalous when you realise that the UK’s military spending is among the highest in the world.

It’s time to shift priorities. This is the message we want to communicate on the Global Day of Action on Military Spending on Monday 14th April. However you share that message, you can contribute to a global wave of action to turn the tide on military spending.

Together we can show that people know it’s time to shift priorities and redirect military spending to the things we really need.